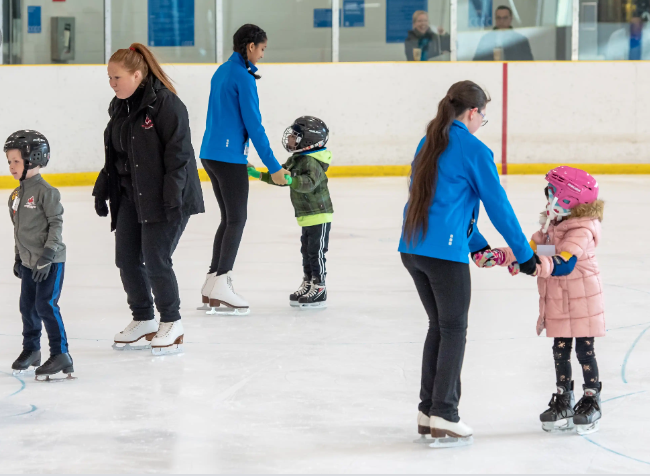 Skating is not only for fun, you can make money from skating as a professional. You can also win laurels by performing in the Olympics or any other recognized athletic championship. Before becoming a professional you have to enroll in a skating school and learn the necessary skills associated with the sports. We would be listing out 10 Best Skating Schools in USA where you can turn your passion and hobby into a profession.

For you to be a good skater you must start learning the basic skills very early before the muscles start forming; these skating schools in USA listed above can admit a child once he or she is older than 3 years.

We have in this post outlined the best skating school in USA, best skating boarding schools for high school students, universities that have skating programs in addition to those with skating as an interdisciplinary activity.

Before we dive into the best skating school in the USA, let’s see some terms associated with skating.

According to Wikipedia, Skating involves any sports or recreational activity which consists of traveling on surfaces or on ice using skates. There are different types of skating which include ice, hard surfaces and snow.

Skating is very popular in the USA and other tropical regions, it is done as a sporting activity and also for fun during leisure time.

There are some basic differences between ice dancing or skating and figure skating, although they are in the same category.

Ice dancing is seen as a ballroom dancing on ice where people are stuck to a routine and are judged by their moves, they dance to the beat and rhythm of music and its competitions can be done using music.

Also, Ice dancing is done in pairs and there are no jumps or throws involved.

Figure skating focuses more on jumps, lifts, death spirals, and spins. There are both pairs and men’s and women’s singles competitions. While figure skaters are scored on the connecting footwork between all of those elements, ice dancers are judged more on the precision of their footwork.

What Are The Top Figure Skating Boarding Schools IN USA?

There are basically few schools in America that has a skating program, they mix there skating activities alongside their academic activities and they are;

What Are The Universities With Skating As An Interschool Sport?

These are skating academies that offer skating programs. They don’t just offer only skating programs but they also provide guidance and professional support to their students.

The ranking criteria for these figure skating programs are as follows;

Schools that were specifically built for skating or that offer skating lessons.

It is very logical to say that a skating school that offers its students the opportunity to participate in skating competitions and a promise to turn them into professional skaters is better than those without such prospects. So, we rank those schools better.

Skating coaches that are Professional Members of US Figure Skating have their schools ranking higher. Moreover, all the schools on our list have professional coaches.

1. The Skating Club of Boston

The Skating Club of Boston is located in Boston and was established in 1912, making it one of the oldest skating clubs in the United States.

The skating club is also a founding member of the U.S. figure skating, the governing body of skating in the United States.

Since 1912 till today, the skating club has kept its place as one of the best skating schools in USA.

The club employs professionals and accomplished skating coaches to help train its students on skills that would make them excel in the sport of skating.

Various programs are available ranging from learn to stake, junior, adult activities, competitive training. In addition, there is Theatrical skating and Team synchronized skating. You can visit the website below to learn more about this best skating school USA.

Next on our list of best skating schools in USA is the petit national ice center. This school has trained thousands of professional skaters over the decade.

It has classes for youths, speed skating, teens, free/figure skaters, Hockey and Inline. You can see that the programs are broad.

Apparently, a facility that can house Olympic training is well above good. Meanwhile, it is one of the best in America.

One of the important reasons it is top on our list of staking schools in USA is because every student receives free public staking admission to be used throughout the staking school session. These free admissions are seen as additional practice time to work on your skating skills

Another skating school in the USA that makes it to our list is the Figure Skating Academy, the Academy members receive privileged information regarding sales and discounts, upcoming events, the ability to purchase Academy jackets, and an exclusive opportunity to enroll in the Academy Class.

Once skaters have completed the Learn to Skate levels, the next step is our Academy Freestyle class. Well, it is basically for members who wish to take additional lessons in Jumps, Spins and Moves in the Field.

This is basically like a school where there are campus seminars and breaks. The freestyle lessons and competitions are always shown to look forward to.

This is another top skating school in USA located in the city of Denver.

The academy has youth, adult hockey, skating lessons and ice skating. The programs are 11 in number. This is a lot if we are to say.

Lastly, the Figure Skating, Hockey and Public Skate programs provide wonderful experiences for youth, teens and adults alike. Whether you are just learning how to skate or have been on the ice for many years, Big Ice has a program for you.

Conclusively, it is one of the best figure skating schools in USA.

The skating rink of this USA skating school is one of the best in America. Looking for a place/school to learn both ice skating and figure skating in USA? This is your best bet.

Located at Jacksonville Ice & Sportsplex, the Learn to Skate classes focus on teaching the fundamentals of skating to prepare for a successful transition into figure skating or hockey.  Again each level is led by our certified skating instructors.

All the classes are grouped into four namely, junior, hockey, adult, senior academies in addition to specialty class.

If we are to help you make a pick, this is one of the best.

This is one of our best skating schools in USA. Nashville Skating Academy is a year-round learn to Skate program that can help you master the skill of skating. No matter your age or skill level, there is a skate class perfect for you or your child.

Actually, the classes at NAS are divided by age. Typically, children between the age of 3 to 5 years old are in the Snow Plow Sam 1 class, while children 6 to 15 years are in the Basic 1 class.

Meanwhile, Adult classes are for 16 and older. You however move up the classes once you have mastered the skill for your class.

Most importantly, all skaters have the opportunity to join a youth competition skating program.

Besides the traditional skating that other skating schools in USA do, the Center Skating Academy has some programs. They can be named Figure skating, ice dance, synchronized skating, and hockey skating skills. Moreover, all our schools teach hockey.

Thus, we are located in the heart of The New England Sports Center, training people of all ages with the help of great coaches.

It is one of the best figure skating schools in USA.

Not all skating school in US are meant for everyone. Currently, SUN Pair doesn’t have adult classes. For now, they are for Snow plan and basic 1.

Pre Freestyle and freestyle classes are also available. Worthy of mention is that they have professional teachers and quite a high standard with strict rules like no make-up classes.

With over 50 years of combined coaching experience, they teach children and adults the fundamentals of ice skating while building confidence and skills.

The Cincinnati Skating School is a non-profit group ice skating program owned and operated by the Figure Skating Club of Cincinnati which are the organizers of the Skate Cincinnati competition.

One of the great features of these programs is that their classes are offered in small groups of typically 7 or more people. Furthermore, the classes are grouped according to age ranging from class 1 to 6.

However, there are 2 extra classes namely the Bridge Team for CSS advanced stakers and the Specialty Class for those that need additional instruction in Moves in the Field, Dance, Jumps, Spins, and Artistry in Motion.

While some skating schools have beginner class 1 and 2. This school has 3 and even competitors clubs.

Beyond this, it has learned to take class in 4 stages before the hockey class.

Truly, you are the one to make a choice.

These are the best skating schools in USA. Do read through and ask questions where you find them confusing. You may want to enroll your child in a skating school, who knows, they may just be the next olympian.