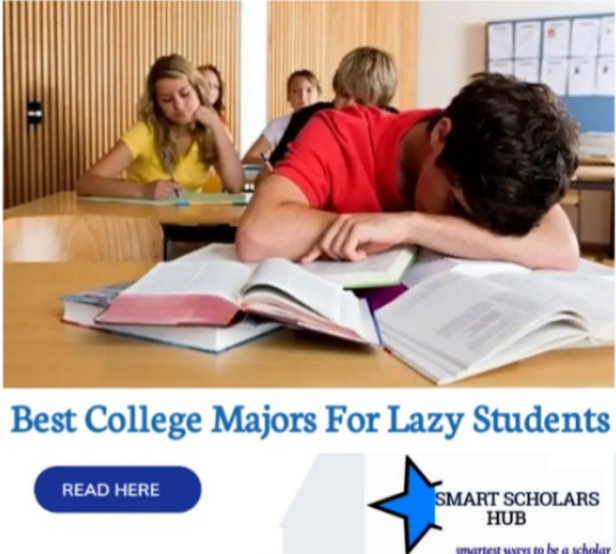 Education might be a worthwhile initiative to embark on but it isn’t for lazy students, to get good grades you must work hard and burn the night candles, however, there are some college majors for lazy students, and these majors are designed to accommodate students who wouldn’t have much time studying for other complicated degrees.

The job prospects of these degrees mentioned here are okay, there are higher chances of securing a job after graduation.

However, there are some things to consider when choosing a college major for lazy students.

Things to Consider When Choosing a College Major for Lazy Students

There are many degrees for lazy students but when picking you should select majors that align with your interest.

For example, If you have an interest in culture and events from the past you should consider studying history.

Studying a major that aligns with your talents could also be a factor in selecting a college major for lazy students.

A typical example is someone who is talented in music, he or she would perform well if they or opt for a major in music while selecting college majors for lazy students.

The requirements for a particular major is also a determining factor in determining what to study as a lazy student.

Some majors require you to have a credit in maths and other science subjects or have a GPA of over 3.5 while some majors are very lenient with these requirements.

Below is a list of the top majors for lazy students that would help you choose a degree to study in college.

A music major is among the best college majors for lazy students, you just need to possess some musical talents or be passionate about music to finish with good grades.

You would also get the opportunity to share your talents with professionals who share the same musical talents as you.

As a Music Major, there are several ways you can make money out of the industry and build a Career for yourself.

Some of the career opportunities for Music Majors and their average salaries include:

If you love languages, specifically the English language, then an English major is the perfect degree for you as a lazy student.

As an English major, you’ll have the freedom to express your natural abilities and expand your scope of understanding of the English language by reading a lot of literary works.

With an English Major, you can pursue the following career opportunities:

Humanity is a broad faculty that consists of different fields like arts, history, philosophy, literature, religion, and even music.

A degree in humanity is a good major for college students. These are various high-paying jobs you can get with a humanities major.

There are thousands of languages spoken across the world and you can devote your time to studying one and build a career from it.

These are various jobs you can get with a language major.

Education is a vital sector in the development of any nation, if you are good in any course you can build a career around it and become an expert.

As an education Major, you’ll be able to pass your knowledge to others and impact the world from the classroom. However, the classroom is not the only place where Education majors can build a career.

Check out the following career opportunities for Education majors:

Creative writing is also another good college major for lazy students, if you are passionate about writing you can become a professional writer.

These days, the services of good writers are highly demanded in different industries by corporations, individuals, and firms.

If you’re skeptical about what career opportunities await you as a creative writing major, you may want to consider the following:

History is an interesting major which also makes it to our list of degrees for lazy students.

You have to study past events and how they shape our world.

You won’t have to go through the burden of performing technical tasks or solving huge problems.

The following career paths are worth considering for every History Major. Take a look:

Communications is a major that requires less stress, you would study advertising, mass media, and communications.

Apart from the fact that you’ll improve your communication and writing skills during your study, you’ll also have a variety of career options:

Religion is another major that is less technical; it only requires you to research, read and understand beliefs, institutions, and systems of faith of different peoples, cultures, and communities.

Check out the following career opportunities that may await you as a Religious study major:

The last degree on our list of college majors for lazy students in sociology.

Sociology is a Social Science course that is focused on the study of human behaviors and society.

This major can be fun to study because you’ll begin to understand people, cultures, and human behaviors better.

With this knowledge, you can choose to build a Career as:

What Is A Good Major For Lazy People?

What Is The Most Regretted Major?

A survey conducted by the Federal Reserve Survey showed that arts and humanities majors recorded the highest rate of regret.

What Is The Quickest Degree To Get?

There are so many degrees that you can get at a fast pace especially if you go through the accelerated route. Nevertheless, many people consider education, business administration, and psychology to be among the fastest degrees.

No college major is easy, you would still study and read to pass. But the stress involved in some of these degrees mentioned here is lower.

What Happens When An Insurance Claim Is Made Against You?